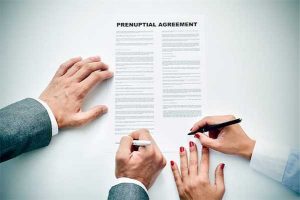 There was a time when prenuptial agreements were associated mostly with celebrities and the very wealthy. Today, however, couples frequently wait longer to marry. They enter these unions after first building careers and accumulating financial assets independently. Conversely, they also bring individual financial liabilities to the relationship as well. As a result, prenuptial agreements have become more commonplace now than they were with previous generations.

Discussions about money can be uncomfortable for even the most compatible couples, yet financial issues are often cited as at least a contributing factor in relationship break-ups. The time to discuss who owns what and how money should be handled during the marriage is before the couple says, “I do.”

What should be included in a prenuptial agreement depends not only on the terms the couple has agreed upon, but also on the laws governing marital property, divorce and alimony in the state where the couple resides. Jamie Schoen’s article, “5 Things to Think About When Considering a Prenup,” poses questions couples should ask themselves before drawing up this legal agreement.