Larry Birkhead, the biological father of Dannielynn, is not entirely done fighting. Debra Opri, Esq., Mr. Birkhead’s former attorney alleges she was not paid $620,492.84 in fees resulting from her representation of Mr. Birkhead during his custody dispute.

On May 29, 2007, Ms. Opri allegedly filed court documents with the Los Angeles Superior Court for all of her travel expenses, expensive lavish dinners, and even for expenses associated with her husband, whom traveled with her, in addition to her “usual hourly rate” of $475.00 per hour, court filing fees, subpoena costs, deposition costs, accounting and appraisal fees, etc. Ms. Opri stated “legal services entailed hundreds of hours of work”. 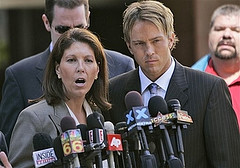 Subsequently, a statement released by Ms. Opri’s publicist, James Levesque revealed media reports that Ms. Opri is suing Larry Birkhead are “incorrect”. He further stated “Pursuant to a legal retainer and media agreement signed by Mr. Birkhead in September 2006, Mr. Birkhead was required to participate in a private arbitration. He failed to do so”.

Mr. Levesque further stated “The arbitrator instructed Ms. Opri to secure a court order via a petition for arbitration because Mr. Birkhead was continuing to ignore all requests to resolve this matter. Mr. Birkhead’s statements are not correct that he notified anyone of his unavailability. He simply refused to participate at any level.”

Mr. Birkhead alleged he advised Ms. Opri and her attorney he would be out of the state of California taking care of his daughter until the conclusion of an upcoming June custody hearing in the Bahamas.

In his own statement, Mr. Birkhead brushed off the lawsuit saying “The only question at the end of the day is, how much money will Debra Opri be paying me?” “At this time, the public is not aware of the unbelievable circumstances which led me to firing Ms. Opri,” he continued, “Thanks to the efforts of my Bahamas attorney, Emerick Knowles, I am fortunate enough now to be spending time with my daughter, Dannielynn”.

Additionally, there is a contract termination dispute between the parties. Mr. Birkhead alleges he terminated her services in March, and Ms. Opri stated technically she remained in his employ up until last month (April, 2007) because he failed to sign a withdrawal release. On April 23, 2007, a Los Angeles Judge signed off on her release.

It was reported back in March, 2007, Mr. Birkhead was approached by NBC Universal to appear on some TV shows for major money. Behind the scenes, Ms. Opri and her agent, Babette Perry (who works with the IMG Agency) were negotiating the deal on Mr. Birkhead’s behalf. NBC Universal agreed to pay Larry $1,050,000.00. Mr. Birkhead subsequently appeared on a Bravo special. He also repeatedly appeared exclusively on “Access Hollywood” and “Today”.

However, it is alleged that after the first installment check of $850,000.00 went out, it ended up in Debra Opri’s client trust fund account. It was reported Ms. Opri refused to give Mr. Birkhead his money and that is precisely the reason Mr. Birkhead fired her.

In short, it was alleged Ms. Opri’s agent, Ms. Perry requested NBC send the check directly to Opri, who then promptly put it in her trust fund account. Ms. Perry alleged Ms. Opri specifically told her that Mr. Birkhead wanted the money in that account. However, it was reported by TMZ that Mr. Birkhead is outraged, claiming he never authorized this transaction. NBC sources say they were just following Ms. Perry’s instructions.

It was also learned by TMZ that Mr. Birkhead has consulted lawyers about suing Ms. Opri and others for allegedly pilfering his money.

It was reported Ms. Opri offered Mr. Birkhead a reduced bill of $511,365.09, but only if he accepted immediately, he declined.