On or before January 23, 2007, the paternity of Dannielynn will be concluded. 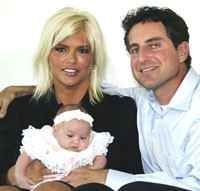 Ms. Smith and her lawyer, now husband, Howard K. Stern, maintain they are Dannielynn’s biological parents. Dannielynn was born in September in the Bahamas.

Paternity of little Dannielynn is being challenged by Ms. Smith’s former boyfriend, celebrity photographer, Larry Birkhead. Mr. Birkhead alleges Dannielynn was conceived on New Year’s Eve 2006, while the then couple were celebrating in Las Vegas.

Mr. Stern’s attorney, James Neavitt is challenging the Court Order and stated the California Court will have no jurisdiction in a possible custody hearing regarding the Bahamas-based couple and that the paternity test order is null and void.

However, the Judge ruled the L.A. Court did in fact have jurisdiction to issue a ruling in the case. Even though Ms. Smith claimed to be a resident of the Bahamas, she had recently worked and lived in California.

Mr. Birkhead’s lawyer, Debra Opri, has offered to have the saliva swab test flown down to the Bahamas and insists her client will prevail in his quest to prove he is the father.

Ms. Smith’s lawyer, Ron Rale, chose to keep quiet on the facts of the case, and stated paternity proceedings are confidential under California law.

Mr. Birkhead allegedly concluded that when Dannielynn is found to be his biological child, he will immediately move to have Howard K. Stern’s name removed from the birth certificate as her father.

Ms. Smith and Mr. Stern were “wed” on a yacht/catamaran which was anchored off Blackbeard’s Cay in Nassau, Bahamas on September 28, 2006. It was alleged the union of the couple was “not legally binding” as there was the absence of the necessary legal paperwork, however, it was confirmed the couple “exchanged vows before God”.