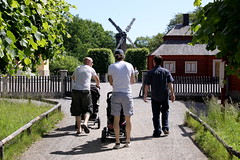 Under most circumstances (with the possible exception of surrogacy situations), establishing maternity of a child is obvious. Establishing paternity is another matter. But is this uncertainty enough to require genetic testing for all new parents and babies? If, after reading the following, you need assistance from a Hunterdon County lawyer regarding paternity issues, contact the family law attorneys at The Rotolo Law Firm located in New Jersey, Clinton Township.

A New Jersey Assemblyman recently put forward a bill that, if adopted, would require all new parents and their babies to undergo genetic testing to establish parentage. Because maternity is usually easier to prove, the bill, admittedly, is geared more to determining paternity. The thinking behind such a bill is that establishing paternity from the start would alleviate the potential for future court battles and the heartbreak associated with them. (1)

Current New Jersey law essentially presumes the husband is the father of a child born during the marriage, or within 300 days after a marriage is ended by annulment, divorce or death of a spouse. (2) In the case of babies born outside of a marriage, the unwed father should make the effort to establish his paternity. (3) In New Jersey, parents can sign a Certificate of Paternity, which establishes the man named as the legal father of the child. (4)

When a father signs a Certificate of Paternity, it helps to establish the rights and privileges of both father and child, as well as the duties and obligations the father has toward that child. A legal father has the responsibility to provide financially for his child and to meet his child’s health and emotional needs. With these responsibilities come visitation rights and the right to seek custody should the relationship between mother and father terminate. (5)

Establishing paternity is important for the child, as well, as it protects his or her rights to inheritance and other benefits, including medical, Social Security, life insurance and veterans’ benefits. It also provides a child with important information regarding his or her medical history. (5)

For most people, the presumption of paternity is sufficient, at least until the relationship between mother and father sours. In that case, the court may order genetic testing if there are questions regarding paternity before ruling on such matters as child support, visitation and custody.

New Jersey previously considered mandatory genetic testing, but rejected the idea as too costly in terms of money and time, and for being an invasion of privacy. (4) The proposed bill would put the financial burden, at least, on the parents and their insurance providers. (1)

Whether or not such a bill will make it into law is yet to be seen; to date there is no companion bill before the State Senate, so any decision is a long way off. (1) In the meantime, if you or someone you know needs assistance regarding paternity issues in Hunterdon County, contact the family law attorneys at The Rotolo Law Firm.