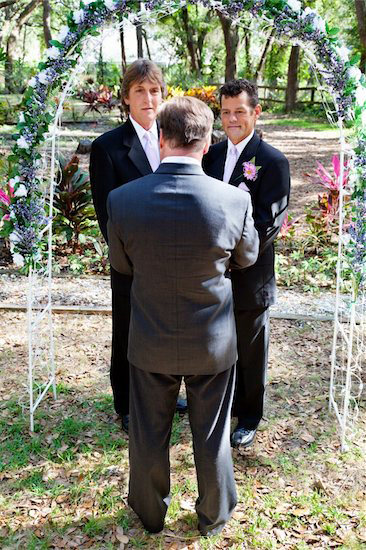 Although the State Supreme Court last week upheld a lower court decision to allow gay marriage, the issue has yet to be totally resolved. Still, gay couples throughout New Jersey are making arrangements to take advantage of this ruling as soon as possible. (1)

This past summer, the U.S. Supreme Court overturned the Defense of Marriage Act of 1996 (DOMA), saying it violated equal liberties protected by the Fifth Amendment. In that decision, the Court ruled gay couples involved in state-sanctioned marriages would be granted the same federal rights and protections that traditionally married couples enjoy. While that decision did not say all states must recognize gay marriages, a New Jersey Superior Court judge this past September ruled that New Jersey’s ban on gay marriage went against this Supreme Court ruling and that such marriages would be allowed in the State effective October 21. (1)

Governor Chris Christie appealed that decision, seeking to delay the October 21 date. Last year the Governor vetoed a bill that would have legalized same-sex marriage, saying the issue should be put on the ballot for voters to decide. Lawmakers had until January 2014 to overturn the Governor’s veto. In hearing the appeal, the State Supreme Court ruled there was no need to delay the lower court’s decision and granted provisional approval of gay marriage, making New Jersey the 14th state to recognize these marriages. (1)

A final NJ court ruling is not expected until next year and, because the recent NJ Supreme Court decision was unanimous, few think the final decision will be any different. Some NJ proponents of gay marriage stress the importance of having this change passed as law through legislation to support the NJ Supreme Court’s decision. A two-thirds majority vote is needed to overturn a governor’s veto. Lawmakers fell short of that with a vote of 42-33 in the Assembly and 24-16 in the Senate; 54 Assembly votes and 27 Senate votes are needed. Some wonder if the Court’s decision will spur legislative action on this matter. If so, it would be the first veto by Gov. Christie that the Legislature will overturn. (3)

In the meantime, gay couples throughout the State were dealing with logistical problems associated with taking advantage of the Supreme Court’s ruling. Because the Court’s decision took effect at 12.01 a.m., many gay couples wanted to mark this historic ruling by exchanging vows soon after midnight on October 21. There was a glitch. New Jersey law imposes a 72-hour waiting period between the time a couple applies for a marriage license and the time the ceremony can take place. The timing of the Court’s decision on the appeal did not allow for that 72-hour waiting period to be met. This left couples who wanted to be among the first to exercise their newly acquired right to marry scurrying to find judges who could override the waiting period. (1)