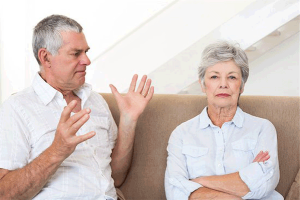 The U.S. continues to hold the highest divorce rate out of any other country with an estimated 45% of unions expected to end in divorce, according to a study released last month. And while this rate has remained relatively steady for the past 20 years, what is on the rise is the number of divorces among the 50-plus age group.(1)

According to the study, entitled “Gray Divorce: A Growing Risk Regardless of Class or Education,” about a quarter of all divorces in the year 2010 involved couples age 50 or older. In fact, the study pointed out the divorce rate for couples in this age group has doubled in the two decades between 1990 and 2010. While one in every four couples divorcing today is over age 50, one out of every ten is over age 64.(2) An article in the November 2014 “AARP Bulletin” pointed out that the reasons behind these divorces are much the same as those for any other couple’s divorce regardless of age: general discontent, boredom, built-up grudges, the search for a different kind of life; falling out of love with your spouse or into love with someone else. The reasons why the divorce rate among this age group is increasing while the divorce rate among their younger counterparts remains steady is another story.

The study cited above suggests that one reason is this age group was the first generation to divorce and remarry in large numbers when they were younger and now as they near their retirement age, they are in their second or third marriage. Traditionally remarriages have been less likely than first marriages to succeed. Other reasons behind the rising rate, according to the study, include divorce having less of a social stigma than it did in the past, and people of that age group, particularly the women, having more financial resources available to them.(2)

Divorce over 50 does present its own set of obstacles for couples to overcome. Because these couples have been involved in long-term relationships, they have had the time to acquire more financial assets – and debts – than their younger counterparts, and have to deal with the distribution of retirement assets and the divvying up of businesses and real estate holdings, as well as debt in the form of joint credit cards and loans.(3)

Retirement is a major issue for these couples. Because they are nearing retirement age, there is little time for them to recoup financial losses or overcome financial hardships. Divorce itself can put a strain on any bank account – legal fees, counseling expenses, and sole responsibility for previously shared expenses all add up at a time when these couples are moving past their peak earning years. The “AARP Bulletin” cited data showing that after divorce the average income for a man drops about 23% and for a woman by about 41%. Added to this is the fact that retirement costs are significantly higher for divorced individuals than for couples. In fact, retirement costs were 40% to 50% higher on a per-person basis for divorced couples than for married couples.(3)

There are several issues individuals should consider to help lessen the financial impact of a gray divorce: