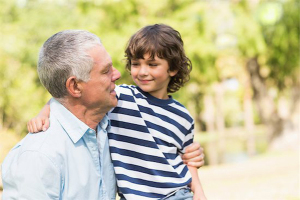 A recent Woman’s Day magazine article discussed “grandfamilies” or households in which grandparents fill the role of parent for their grandchildren and how these situations are becoming more common. The article cited a number of factors contributing to the need for this arrangement, including a rise in drug use between 2002 and 2012; a 25% jump in the number of young parents imprisoned between the years 1997 and 2007, and a recent recession which left many people without work. Whatever the reason, there are more grandparents parenting their grandchildren than one may think.(1)

The 2010 Census showed that one out of every ten children in this country lives with a grandparent. That Census also disclosed that in the U.S.

Custodial grandparents come from all walks of life representing all socio-economic strata and ethnicities. And, while stepping up to fulfill a need in a child’s life may be admirable, it does not come without risks.

Oftentimes these arrangements occur when parents face some type of tragedy – loss of job, imprisonment, addiction – and, when these troubles are resolved, they look to regain custody of their children, sometimes leading to contentious or strained relationships between parent, child and grandparent. In order to preserve their relationships with their grandchildren, custodial grandparents are often urged to legalize these relationships.(3)

All 50 states have laws governing grandparents’ rights. In New Jersey, grandparents initially were only allowed to seek visitation privileges if the parents of their grandchildren were dead, divorced or separated. The law was amended in 1993 to allow grandparents to apply for visitation rights even if the child’s immediate family was intact but, to do so, the grandparents must prove that such visitation is in the best interest of the child.(4)

When parents try to regain custody of their children from their grandparents, they sometimes seek to sever the ties between child and grandparent for several reasons: jealousy; fear that their own parenting skills will be criticized; a desire to forget what left them unable to care for their children in the first place.(3) There are a few different tactics grandparents can take to ensure that their relationships with their grandchildren remain intact:

It can be disruptive for everyone, especially the child, whenever family dynamics change. Legalizing a grandparents’ custodial relationship can help limit the damage such changes can have on a child.