Shortly after the distressing news of Anna Nicole Smith’s demise, the fight for baby Dannielynn continued on a shocking upward spiral. The potential father list has risen from two to five! 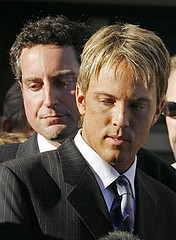 As previously known, Howard K. Stern and Larry Birkhead were the alleged contenders. The paternity test was postponed from January until February 2007.

However, a strange turn of events has since occurred. Two additional men are contending to be Dannielynn’s father; the bodyguard, Alex Denk, and the prince/Zsa Zsa Gabor’s husband, Prince Frederick Von Anhalt. Additionally, Ms. Smith’s sister alleged Ms. Smith had her late 89-year old husband/billionaire oilman, J. Howard Marshall’s sperm frozen, which has been added to the equation.

Both Denk and VonAnhalt alleged having an affair with Ms. Smith at some point and time within the conception date of Dannielynn.

On February 9, 2007, Ms. Smith’s estranged mother, Virgie Arthur, flew to the Bahamas to petition for custody of baby Dannielynn, however, she was advised she had to go through the Court system.

Howard K. Stern arrived in the Bahamas the next day and advised that Ms. Smith allegedly despised her estranged mother, Ms. Arthur, and further opined she “has no right, she can’t take Anna’s baby.” Mr. Stern stated “Danni” is all he has left now. Mr. Stern prohibited Ms. Arthur from entering the gates of the Bahamas mansion where he and the baby are currently residing. He allegedly stated “As long as I have breath in my body, [Virgie] will not see Dannielynn”.

Larry Birkhead is also pursuing a custody battle under the new circumstances. After Ms. Smith’s death, Mr. Birkhead is more determined to prove paternity of Dannielynn, and has renewed his petition for a conclusive paternity test. Ms. Smith’s estranged mother is backing Mr. Birkhead, as he is the only one pushing for a DNA test.

Ms. Smith filed her Will on February 16, 2007, prior to Dannielynn’s birth, and as such, it made no provisions for baby Dannielynn.

It was reported if Ms. Smith’s estate inherits a part of the fortune of her late husband, J. Howard Marshall, the money, an estimated $474 million, would all go to the next of kin, Dannielynn. The biological father would have control of Dannielynn, and her fortune. This will more than likely include a monthly allowance to take care of her.

Once paternity in this matter has been established, and it is decided where baby Dannielynn will be living and with whom, it is only then pursuit will be sought as to Ms. Smith’s former battle with The Estate of J. Howard Marshall.